Apart from well-known and critically endangered Bohemian Early Gentian (Gentianella praecox ssp. Bohemica), there are also other species of gentians occurring in Czech landscape, whose fate was in danger during the last few decades. These are closely related taxons Autumn Gentian (Gentianella amarella ssp. amarella) and Gentianella obtusifolia ssp. sturmiana that are among other things also connected by main reasons for decline of localities.

Gentians belonged in the past to common representatives of flowering plants of mowed meadows, pastures and balks in our landscape. Although they look very much alike, overall 6 species of gentians are distinguished in the CR based on flower size, shape and hair on calyx. With the exception of German Gentian (Gentianella germanica), which is extinct in the CR, all other mentioned species are considered critically endangered. 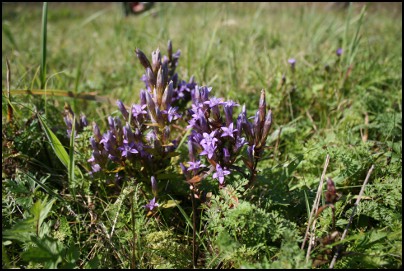 There are currently about 80-90 localities of G.amarella ssp. amarella and 11 localities of G.obtusifolia ssp. sturmiana in the Czech Republic. That represents in both cases only fragments of their earlier occurrence.
The core of occurrence of both species are managed meadows and pastures, which – with their vegetation structure - constitute suitable conditions for the growth of these plants. Unfortunately the interruption of long-term management during the last century had harmful impact on the state of their populations.
The two species belong - according to the Regulation 395/1992 - to critically endangered (G. obtusifolia ssp. sturmiana) and strongly endangered (G. amarella ssp. amarella) species of our flora and both are listed in the Black and Red list of vascular plants of the Czech Republic in category critically endangered with 90 % or greater decrease in known populations (C1t).