Great Bustard is a vulnerable species on a world-wide scale, in the Czech Republic classified as critically endangered. Protection of the disappearing central-european population of Great Bustard can – due to considerable space requirements of the species - only be successful when it is done in coordination with other neighbourring countries at a large-area level. Ensuring such conditions is the subject of a Memorandum implemented under the patronage of the Bonn Convention.

The Great Bustard, a typical representative of steppe fauna, nested until not long ago in non-forested areas of the entire Eurasia. In the Czech Republic, a permanent nesting population existed in the area of Znojemsko since the 19th century. However, the numbers of this population, which historically reached 40-50 individuals, started decreasing in the second half of the 20th century, mostly because of unsuitable way of land management. During the last decade, only individual birds or small groups have been irregularly observed at traditional occurrence spots in the Czech Republic. Evidence of so far the last nesting of this species in our country comes from the year 2006. Thanks to concentrated efforts a Great Bustard population was maintained in a close Austrian locality in west Weinviertel, where the population is currently slowly growing, and the birds also occasionally fly to the area of Znojemsko. 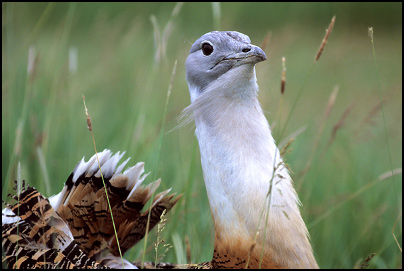 The objective of the Action Plan being prepared is to renew an independent nesting Great Bustard population in our country. The principal measure of the project is change of the current agricultural management to farming suitable for the Great Bustard at its localities of occurrence.