Ladybells (Adenophora liliifolia) was never a common species in the Czech Republic. Currently, however, are its light-blue bells set for alarm ringing. One can only smell them at last five localities. The species is not doing much better in other Middle-European countries either. Most likely, changes in forest management and also not negligible influence of gnawing by overpopulated herbivores are to be blamed for this situation.

Lilyleaf Ladybells is a long-lived species of mostly light forests, forest edges and clearings. Its stem is over 1 m tall, bears leaves and from June to August it blooms with rich light-blue flowers, organized in panicles. Noticeable similarity to bellflowers (Campanula) is not accidental, Ladybells belongs to the same family. Ladybells can be distinguished from Campanula plants for example by style sticking out far from the corolla and the aromatic flowers. 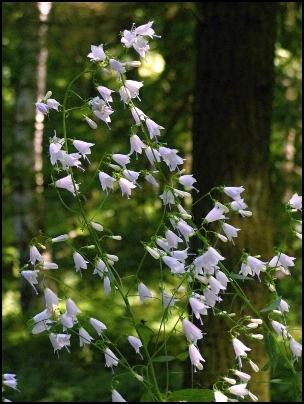 Lilyleaf Ladybells is currently known to occur at five localities in the Czech Republic: Natural Monument Babinské louky in České středohoří, National Natural reserve Karlštejn and Natural Reserve Karlické údolí in Český kras (Czech karst), forest complex near Bílichov in natural park Džbán in central Bohemia and forest Vražba in Jaroměřsko area in east Bohemia. All populations are relatively weak. The total number of plants at all localities is approximately 500 individuals.
The western edge of Ladybells' occurrence range runs through Central Europe. The species is evaluated as endangered in Germany, Austria, Switzerland, the Czech Republic, Poland, Slovakia, Hungary, Slovenia and Croatia. The range further continues through Eastern Europe all the way to West Asia. According to the Rgulation No. 395/1992 Ladybells is classified as critically endangered species of our flora and is listed in the same category also in the Black and Red List of vascular plants of the Czech Republic (Grulich 2012). At international level, the species is listed in Annexes II and IV of the Habitats Directive (92/43/EEC).