„Among sites that, from a botanical point of view, deserve protection from cultivation by human hand, belong most of all the slopes near Kleneč at the foothill of the memorable hill called Říp, supporting characteristic stands of psamophilic plants. Such vegetation hardly would be found anywhere else, but due to bustling planting of False Acacia it is facing an utmost danger of destruction. The above mentioned hill slopes are of importance due to the occurrence of a particularly rare sand pink” (F.A. Novák, 1915).

The Bohemian sand pink (Dianthus arenarius bohemicus) is a perennial with white flowers growing in dense clusters approximately 15 cm tall. It is an endemic species of pleistocene gravel-sand terraces near Roudnice nad Labem. 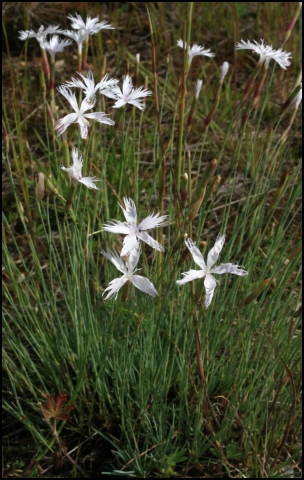 The plant occurs in open grasslands on sand and gravel-sand. Earlier it thrived particularly in dry pastures, which probably constituted an optimal biotope for this species. It was actually as common as to be sold in bouquets in markets.

Sandy hillsides near Kleneč and Vražkov with the occurrence of the Bohemian sand pink were declared a nature reserve already in 1934. After World War II the habitat was protected as a “protected site of an area totalling 0.1834 ha”, in 1976 this size was extended to the contemporary 5.35 ha. Currently the area is protected as a National Nature Monument. The site has also been included into the systems of Important Plant Areas (IPA) and of Special Areas of Conservation (SAC) under Natura 2000. Kleneč is the only remaining original autochtonous site of the Bohemian Sand Pink.