Scarce Fritillary is a critically endangered species of sparse, sunlit decidious woods in lowlands and uplands. For its protection, especially management of suitable habitat, which is constituted of early successional stages of forests with low canopy closure of tree storey and with rich herbaceous and shrubby storey, is necessary. Therefore, to save this species, there is a need for re-establishing coppice management (growing low/coppice forests).

Old findings of this butterfly are known from many places in Bohemia and Moravia, but currently there is only one last population surviving in the Czech Republic – in the Elbe lowland. Moreover, its abundance is at the moment under the level of long-term sustainability. 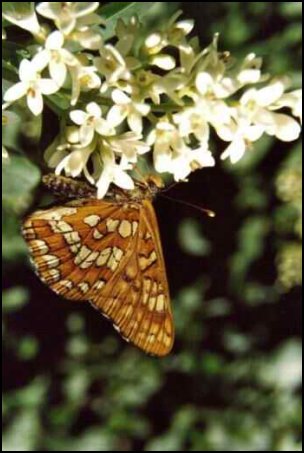 The nutritive plant for Scarce Fritillary larvae in the Czech Republic is Common Ash (Fraxinus excelsior). The food spectrum of solitary caterpillars (after overwintering) is, however, not fully known. Adults feed mostly on nectar of white-flowering shrubs, for example dogwood or viburnum. Half-shade is most suitable for all developmental stages, egg-laying females then prefer rather moist and leeward locations. It can be said that this species follows early successional wood stages, but is not capable of long-distance flyovers (maximum dispersal distance of 1 km), and therefore it requires relatively fast renewal (approx. 15-20 years) of these early biotope stages on mutually interconnected areas.

Proposed Action Plan should ensure especially coordination of management of this butterfly´s biotope, which would lead to stabilization of the current last Czech population. In the case of successful stabilization the Action Plan counts with repatriations of the species into suitable historical localities of the butterfly.