A common herb or a critically endangered species?

“The plant has curative powers, and is therefore needed in medicine. A small dose aids digestion. It is usually utilized in tea, also boiled with spirit and wine it acts against gastric ailments, diarrhea and chlorosis. For animals is the Spring Gentian one of the best medicines, especially against bad digestion and cramps, against jaundice, fever, worms, and others.” (dr. V.K., Czech herbarium published by Alois Hynek in 1899).

Spring gentian (Gentiana verna) occurred at the dawn of the 20th century at nearly 70 localities in Bohemia and Moravia. It was then a relatively common species, growing on moderately moist, low-grass meadows and on mountain slopes, especially in areas between Vltava (Moldau) River and Brdy Hills all the way to the regions of Český Krumlov and Karlovy Vary (Carlsbad) in Bohemia, and in the area of Hrubý Jeseník (High Ash Mountains) in Moravia.

Several decades later, the Spring Gentian was proclaimed a specially protected plant species by Ammendment 48 of the Act no 114/1992, and was listed in the category critically endangered species. 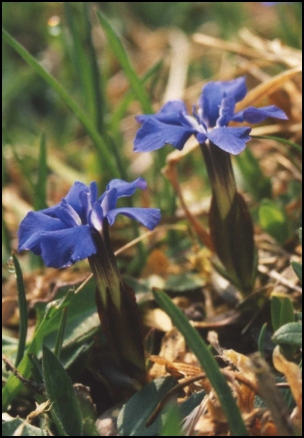 At present it occurs in the Czech Republic in its lowland form only on one site in the National Natural Monument Rovná near Strakonice, and in its mountain form on two sites in the Protected Landscape Area Jeseníky (Ash Mountains).

Main reason for decrease of this species during the 20th century may have been at the beginning collecting and use of the plant as a medicinal herb. Since the 1940s and 1950s, however, a change in agricultural management of the Spring Gentian´s habitats has been the main cause of population extinctions. Especially the abandoned mowing and grazing had a big negative effect, as the Spring Gentian was, as a result, not able to compete with spreading species of meadow herbs and grasses.