If you want to see its loveliness you need to come to the right places early in the spring, when most other plants are only awaking to life. To avoid disappointment, choose a sunny day, otherwise you will find only closed flowers. When welcomed by first “hairy beauties”, you had better not caress them too much – not only are they protected by both Czech and European law, but are poisonous as well. When at its localities, please be careful, there are only about 20 of the “right places” left.

Eastern Pasque Flower (Pulsatilla patens) is a perennial plant that can grow tens of years at the same place and can form rich clusters with many flowers. Its home is in south-Russian steppes; from there the occurrence range of the species spreads to Central Europe. In the Czech Republic, Eastern Pasque Flower occurs mostly in north and north-west Bohemia and these localities form the western edge of its range. 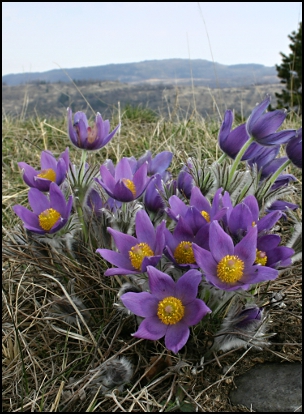 The occurrence at the edge of its range together with small competitive ability probably caused the species' negative reaction to ongoing changes in the landscape and it started to decline. Eastern Pasque Flower is endangered in all neighbouring countries as well. In order to stabilize its populations, it is necessary to renew mowing or even better grazing at localities with less extreme natural conditions, to disturb turf, or alternatively also collect seeds and sow them to the disturbed surface.

Eastern Pasque Flower belongs to critically endangered species of our flora (according to Regulation No. 395/1992) and is classified in the Black and Red List of vascular plants of the Czech Republic (Grulich 2012) also as critically endangered. At international level, the species is listed in Annex I of the Bern Convention and also in Annexes II and IV of the Habitats Directive (92/43/EHS).